Support for starting up a business underestimates risks

The Swedish Public Employment Service’s support to people wanting to start their own business leads to reduced unemployment. But the programme has a weak effect on employment and the participants’ incomes are low for many years. In addition, the Swedish NAO’s audit shows that the support increases the risk of the participants’ becoming over-indebted.

Support for starting up a business (previously called Start-up grants) has existed since 1984 and seems to be one of the Public Employment Service’s most successful programmes. In 2018 about 5,100 people participated for a total cost of SEK 203 million.

The Swedish NAO has audited the long-term effects for participants who decided to set up as sole traders and how the Public Employment Service works with the programme.

The audit shows, among other things, that participants, especially women, had lower incomes for several years compared to those who, at the start of the programme, had remained in open unemployment or participated in any other Public Employment Service measure.

“However, the income received by the participants rose gradually and after seven years the effect was positive for men, while it took another few years for women,” says Joakim Hveem, project leader for the audit.

Furthermore, the Swedish NAO notes that participation in the programme has the effect of increasing the risk of over-indebtedness (i.e. being registered on a long-term with the Enforcement Authority) by about 60 per cent. This applied to men to a greater extent than women.

“Our assessment is that the employment officers need to better inform the participants that self-employment often involves long periods of low income and increased risk of an unsustainable debt situation. This was particularly true for those who opted for a corporate form involving personal liability,” says Auditor General Stefan Lundgren.

The employment effects of the programme are ambiguous and indicate either a zero outcome or a slight improvement, depending on the definition used. Here, the effects also vary from one group to another: participants with higher education had on average a somewhat poorer employment outcome than participants with a shorter education.

“Foreign born participants also seem to have a relatively worse outcome from the programme. This applies to employment and income as well as the risk of becoming over-indebted,” says Joakim Hveem.

For public finances, however, the programme is a success. Reduced expenditure on sick leave and unemployment benefits means that, as early as two years after the start of the programme, the participants have made a positive contribution to the public purse. Over ten years the positive effect was more than SEK 40,000 per participant.

In brief, the Swedish National Audit Office recommends the following to the Swedish Public Employment Service: 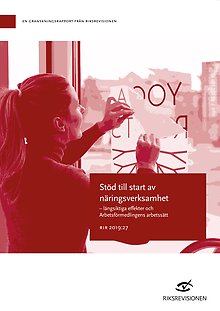 Support for starting up a business – long-term effects and the Swedish Public Employment Service’s approach (RiR 2019:27)