Inadequate conditions for supervision of health and social care

The Health and Social Care Inspectorate (IVO) was created to make supervision effective and strategic. The Swedish National Audit Office’s audit shows that IVO has not yet fully lived up to these expectations, partly because the Government did not provide the Inspectorate with a stable and long-term framework.

On 1 June 2013, the Health and Social Care Inspectorate (IVO) was established, among other things to take over supervision of health and social care services from the National Board of Health and Welfare. The aim was to achieve effective and strategic supervision.

The problems identified by the Swedish NAO are partly due to the Government’s governance. Parts of the appropriations have consisted of temporary funds granted for one year at a time, which has made it more difficult to provide a stable and long-term supply of staff.

“In order to be able to develop the operations, as well as recruit and retain staff, IVO needs a stable financial framework. However, the government’s financial management has been neither consistent nor long term,” says Auditor General Helena Lindberg.

To enable IVO to develop its activities, it is necessary to have access to reliable data enabling the work of the Inspectorate’s inspectors to be effective and risk-based. This has not been the case, which means that IVO may have missed important areas of concern and risk elements.

In addition, IVO has not had an effective IT system to support the inspectors in their work, and seven out of ten inspectors state that the IT support is only useful to a small extent in the supervisory work.

“IVO inherited IT systems from the National Board of Health and Welfare, which was actually developed for other tasks. It has meant that among other things the inspectors must spend a lot of time on manual searches and source checks,” says Charlotta von Porat, project leader for the audit.

The Swedish NAO further notes that IVO has no readily available assessment support, which is needed to ensure that the supervisory decisions are consistent throughout the country, and that there has been no systematic follow-up of IVO supervision.

“It is true that IVO has measured confidence in the Inspectorate, but there is no overall knowledge of the impact over time of supervision on the activities supervised,” says Charlotta von Porat.

The Swedish National Audit Office recommends among other things that the Government gives IVO a stable financial framework.

Recommendations to IVO include 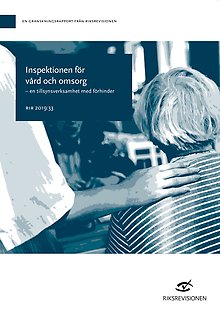