Despite major increases in resources the Police Authority has not been able to ensure minimum staffing levels for community police officers in all vulnerable areas. Shortages of some equipment and little opportunity to share information with social services further hamper the work, the Swedish NAO’s audit shows.

The Government has made it clear that the police’s work to counteract insecurity and crime in vulnerable areas is a priority. The Police Authority has therefore received significant resource reinforcements to increase the number of community police officers who work long-term with crime prevention, relationship building and security-building activities – the method that has the best support in research.

However, the Swedish NAO’s audit shows that the decision to have at least one community police officer per 5,000 inhabitants has not been implemented in a third of the local police areas that contain vulnerable areas. The problems of insecurity and crime remain, and the police still find it difficult to fulfil parts of their assignment these areas.

“The Police Authority has distributed a third of the recent years’ additional resources to local police areas with vulnerable areas, but failed to ensure that these resources really reach all the way,” says Auditor General Helena Lindberg.

An inadequate basis for long-term relationship building activities reduces the potential for reversing the trend in vulnerable areas.

“It is not possible to draw any conclusion other than that the current number of community police officers is not enough,” says Linda Jönsson, project leader for the audit.

According to the Swedish NAO’s assessment, the situation depends, among other things, on deficiencies in management of police resources. The methods used by the police to identify which areas are vulnerable are partly based on subjective estimates, which means that similar problems can be assessed differently depending on who makes the assessment. In addition, there are no procedures for uniform application of the methods, while local application varies.

An aggravating circumstance is that it is not possible to monitor how resources are allocated specifically to vulnerable areas, since traceability stays at the local police area level – which in most cases constitutes a considerably larger area than the vulnerable areas.

“The Authority’s management lacks both a precise way of measuring the needs of the different areas in relation to each other as well as methods of directing resources where they are most needed,” says Linda Jönsson.

The Swedish NAO’s assessment is that the work carried out by the police in vulnerable areas is effective and is carried out using well-proven methods, given the resources that the local police areas have at their disposal. However, efficiency is negatively affected by lack of surveillance cameras and body-worn cameras, as well as limited opportunities to share information between the police and the social services.

“The possibility for the police and social services to share information is an important element in crime prevention work, among other things to try to stop the recruitment of new criminal gang members,” says Helena Lindberg.

The Police Authority is recommended in brief to: 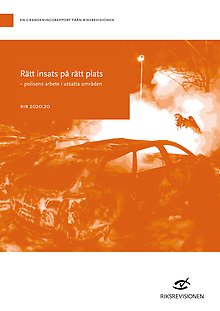 The right measure in the right place – police work in vulnerable areas (RiR 2020:20)