Effective work with guarantees at Sida, but inadequate follow-up

Sida is increasingly using credit guarantees as a tool in its development cooperation. The Swedish National Audit Office assesses that the work is effective, but that follow-up needs to be improved to ensure that the guarantees are fit for purpose.

Sida has used credit guarantees in its international development cooperation for more than ten years. The aim is to mobilise capital and enable financing of development projects that otherwise would not have been viable to lend money at a reasonable cost on the financial market.

The guarantees have become increasingly important in Swedish aid, and the maximum amount for which Sida may issue guarantees has been gradually increased from SEK 5 billion to SEK 15 billion.

The Swedish NAO’s audit shows that the work with guarantees in general works well. The Government’s governance has been clear, and Sida has mainly worked with the guarantees in a purposive way.

However, the Swedish NAO notes that Sida does not systematically plan the follow-up of the results of guarantees. For example, Sida does not always specify which aspects that are relevant to follow up, in order to measure financial outcomes and development outcomes. Sida’s follow-up plans also vary between different guarantees, without clear motives.

“This makes it difficult to assess Sida’s work with guarantees and the extent to which it contributes to development cooperation policy objectives. Inadequate follow-up is a common finding in our audits,” says Auditor General Helena Lindberg.

Since the guarantee instrument is relatively new and the knowledge of its long-term effects is limited, it is particularly important that Sida ensures that the guarantees can be followed up.

“If the follow-up is not planned, it is more difficult to learn from previous progress and mistakes in order to continuously improve the guarantees,” says Helena Lindberg.

The audit also shows that Sida has mainly designed the guarantees based on well-reasoned assessments. However, in some respects Sida does not document important considerations that have been made when designing the guarantees, which makes transparency and follow-up of Sida’s assessments difficult. There are also shortcomings in Sida’s internal support for designing guarantees.

“The assessments of the State’s risk affect the size of the fee which the guarantee recipient must pay for the guarantee. They also affect Sida’s decision whether to subsidise the fee or not. It is therefore important that Sida and the Swedish National Debt Office ensure that the calculations are accurate and well-reasoned,” says Vanessa Liu, project leader for the audit.

It is recommended that Sida

It is recommended that the Swedish National Debt Office 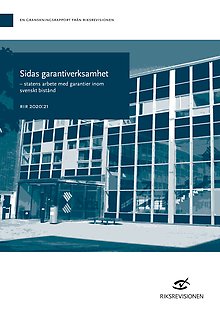