For 50 years the State has invested several hundred million kronor on transport subsidies to companies in the four northernmost counties. However, it is not clear to what extent the money contributes to regional development – or how the subsidy affects the climate, according to the Swedish National Audit Office (Swedish NAO) audit.

The transport subsidy was introduced in 1971 to compensate for cost disadvantages that affect companies in the four northernmost counties, as well as to stimulate “higher degree of refinement” for their products. The payments have amounted to about SEK 350–450 million per year over a long period.

However, the Swedish NAO’s audit shows that it is not possible to determine whether the money leads to increased degree of refinement for the companies that receive it or whether it contributes to the development of the business sector in the subsidy areas.

The Swedish NAO also notes that it is more or less the same companies that receive subsidies year after year, and that a large proportion of the payments have for a long time been going to transport of relatively unrefined goods, such as sawn and planed wood products.

“There is much to indicate that the subsidy has only had a limited impact on both the degree of refinement and development of the business sector in the regions,” says Linda Sahlén Östman, project leader for the audit.

The audit also shows that it is not possible to determine whether the money paid out actually corresponds to the companies’ increased transport costs due to geographical location, and that the Swedish Agency for Economic and Regional Growth needs to improve its procedures to verify that the companies applying for the subsidy provide correct information.

Based on the climate objectives approved by the Riksdag – and the OECD’s recommendations to Sweden – the climate impact of the transport subsidy should have been assessed. This has not been done since the grant was introduced 50 years ago.

“Over the years, there have been a number of signals that the transport subsidy is ineffectively designed and, in the worst case, counterproductive in terms of climate policy. The Government should have obtained better decision support data,” says Auditor General Helena Lindberg.

The Swedish NAO recommends that the Government conduct a thorough review of the design of the transport subsidy.

It is recommended, among other things, that the Swedish Agency for Economic and Regional Growth collects sufficient information about transport distances and modes of transport to enable assessment of the climate impacts of the transport subsidy.

The Swedish Agency for Economic and Regional Growth should also further develop procedures and controls to reduce the risk of systematic errors when the money is paid out. 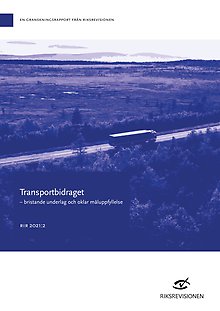