The Government’s extensive efforts to expand higher education programmes in certain shortage occupations have not yielded the desired results. One explanation is that the problem has been a lack of applicants rather than the number of places HEIs provide in different programmes. The Swedish National Audit Office (Swedish NAO) recommends that the Government significantly improves preparation of similar initiatives.

There is a great shortage in several occupational groups that are vital to society. In order to counter this shortage, the Government has given universities and other higher education institutions (HEIs) specific assignments to increase the number of places in certain programmes for healthcare professionals, teachers, preschool teachers and engineers.

This is an exception from the regular governance of the HEIs, which usually determine themselves which programmes and courses to provide and to how many students.

The Swedish NAO’s audit shows that the Government’s efforts have not contributed to any significant increase in the number of students or graduates in these occupations. The targets set have not been reached even by half, and in some cases the programmes in question had even fewer new students in 2019 than before the assignments were given.

A partial explanation is that the assignments in reality have had little chance of solve the problems behind the situation with too few graduates in certain shortage occupations.

“For example, several of the programmes attracted few students from the beginning, and there has been a shortage of teachers with doctoral degrees and internship places. In that case it will not help just to increase the number of study places,” says Keili Saluveer, project leader for the audit.

In the opinion of the Swedish NAO, an expansion may be relevant and effective measure if there are many qualified applicants who are not admitted because of too few places on the programme. However, if there are not enough qualified applicants, the efforts should rather focus on raising the student completion rate and thus the number of graduates.

The Swedish NAO also notes that the HEIs have not had enough time to plan and implement the assignments, which have usually been given after the students had applied for programmes and the HEIs had completed their staff planning.

“The assignments to the HEIs were for the most part well motivated, and it is positive that the Government is acting to increase skills supply in shortage occupations. But in order to achieve better results, the assignments need to be based on HEIs’ ability to implement them,” says Auditor General Helena Lindberg.

The Swedish NAO’s recommendations include that the Government conducts a comprehensive analysis of effectiveness of these specific assignments and communicates it to the Riksdag.

If the Government is considering new similar initiatives, the Swedish NAO recommends among other things the following: 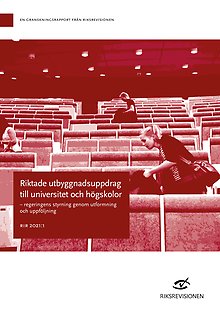 Specific government assignments to universities and other higher education institutions– the Government’s governance through design and follow-up (RiR 2021:1)