The state monopoly on vehicle inspection was abolished in 2010. The Swedish National Audit Office (Swedish NAO) audit shows that availability and freedom of choice have increased since then, but prices and complaints have also increased. At the same time, supervision by the Swedish Transport Agency is virtually non-existent.

The re-regulation of the inspection market was to lead to greater freedom of choice for customers and lower prices, while the requirements for traffic safety and environmental control were to remain high.

The Swedish NAO’s audit shows that the objectives were met in part. Most obvious is that availability and freedom of choice have increased significantly. However, there are parts of the country where the situation remains unchanged since the re-regulation, especially in sparsely populated regions.

However, when it comes to prices, it has not been as the Riksdag intended. Between 2010 and 2019, the price of inspections increased by 56 per cent, while the consumer price index grew by only 10 per cent.

Complaints from customers have also increased, both to Swedac (the Swedish Board for Accreditation and Conformity Assessment) and to the Swedish Consumer Agency. This despite the fact that the share of cars failing the vehicle inspection has decreased since 2011.

In addition, during the same period, the Swedish Transport Agency has in practice completely phased out its supervision of the inspection stations. From having consisted of 5.5 full-year equivalents, the agency’s special inspection group has gradually been reduced to only one analyst.

“Our assessment is that the Swedish Transport Agency does not live up to its supervisory responsibility for the inspection industry. At the same time, we note that the Government has been informed of the situation, but has not done anything to remedy it," says Auditor General Helena Lindberg.

When the reform was implemented, the Riksdag was clear that only those who “with regard to economic conditions and generally good reputation are deemed suitable” should be allowed to conduct inspection activities.

The responsibility for checking compliance with this was given to Swedac. The Swedish NAO considers that Swedac is doing this well, but needs to be given the opportunity to check all members of the boards of the various inspection companies.

“It is also a shortcoming that Swedac does not conduct renewed background checks in connection with the regular supervision every four years,” says Gunilla Lundquist, project leader for the audit.

The Swedish NAO’s recommendations include the following:

See the report for the full recommendations. 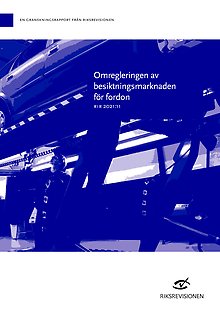