Work to strengthen the operational capacity of the Swedish army is slower than planned. Weaknesses exist in planning, analysis, governance and implementation. Misjudgement of the baseline situation and underfunding have delayed and hampered the work, according to an audit by the Swedish National Audit Office’(Swedish NAO).

In 2015, the Riksdag decided to greatly strengthen the Swedish national defence, and the army’s operational capacity to face an armed attack would increase during the period 2016-2020.

The Riksdag’s decision was taken after a long period of savings in, among other things, the supply of personnel and equipment. During the same period, the Swedish defence forces had undergone extensive restructuring, focusing on international efforts rather than the ability to defend Sweden. This has meant that the Swedish Armed Forces’ ability to adapt has been limited.

The audit by the Swedish NAO shows that the work of the Government and the Swedish Armed Forces has not been effective in all respects. Overall, this has meant that army units have not developed appropriately, and that their ability to carry out their wartime tasks has been limited. Moreover, it is not entirely clear how units are to be designed in terms of personnel and equipment in the event of war.

Not until several years into the 2016-2020 period did the Swedish Armed Forces acquire a sufficiently good picture of the army’s condition and capability, and informed the Government of this. In the opinion of the Swedish NAO this should have happened earlier. In addition, the purchase of new aircraft and submarines had crowded out other equipment projects.

“The starting position of the army proved to be worse than assumed by the Government and the Swedish Armed Forces. Our assessment is that the 2015 defence focus decision was underfunded in relation to what the Swedish Armed Forces were to achieve. In reality, the army has not had the opportunity to achieve what has been decided by the Riksdag and Government," says Auditor General Helena Lindberg.

The 2015 Riksdag decision meant a complete about-turn back to the Swedish Armed Forces being once again able to defend Sweden against an armed attack. The Swedish NAO’s audit shows that this work has been more difficult than expected, among other things because the previous focus resulted in a loss of competence, as well as neglected purchasing and poor maintenance of equipment.

“Building defence capabilities is a complex task that the Swedish Armed Forces devoted many years to developing and refining. Important parts of this competence were lost in the context of the restructuring after 2000. This has delayed and hampered the transition,” says Sascha Sohlman, project leader for the audit

The Swedish NAO notes that the Government’s governance has not been sufficiently clear. In addition, the Swedish Armed Forces’ planning and implementation have had shortcomings in several areas, which have led, among other things, to disjointedness and have had unforeseen consequential effects. This applies to both supply and stocks of equipment and to transport and exercises.

It is recommended that the Government

It is recommended that the Swedish Armed Forces 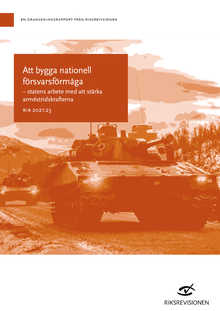