Substantial shortcomings in documentation for more than one in two reforms

The majority of the largest reforms in Sweden in the 2000s have been based on documentation with considerable shortcomings. Among the reforms that it has been possible to evaluate, only half have achieved their set goals or expected impact, according to the Swedish NAO’s audit.

The Swedish National Audit Office (Swedish NAO) has examined the documentation for 25 of the reforms with the largest amounts involved that were introduced in Sweden between 2000 and 2017.

The audit shows that the majority of the reforms are based on deficient documentation with regard to descriptions of what societal problems are to be addressed, what goals and impact are sought after, what the consequences will be and at what cost. Only 5 of the 25 examined reforms fulfil the basic quality requirements in these areas.

The Government also sometimes only briefly describes a reform before the Riksdag decides to allocate funds to it. The Government then presents more thoroughly prepared decision support at a later stage.

Evaluating major reforms in relation to their goals is necessary in order to assess whether the State uses its resources appropriately or whether changes need to be made to achieve the intended goal or impact.

There is no procedure for ensuring that major reforms are followed up. The audit shows that only 11 out of the 25 examined reforms have been followed up by the Government. In addition, other actors, primarily the Swedish NAO, have examined 8 more of the other reforms.

In practice, there is thus a lack of knowledge on how well the initiatives have performed for several of the largest reforms in Sweden.

It has been possible to evaluate the extent to which goals and expected impact have been achieved for 15 reforms. In its audit, the Swedish NAO estimates that roughly one in two reforms have achieved their goal or expected impact.

In 13 cases, the Swedish NAO has been able to follow the cost trend after three years. For 6 of the reforms, the outcome has been tolerably in line with the original estimates, while in the remaining cases the deviation has been more than 25 per cent.

“The Government needs to ensure that better quantitative estimates are made ahead of major reforms,” says Krister Jensevik, project leader for the audit.

The National Audit Office recommends that the Government: 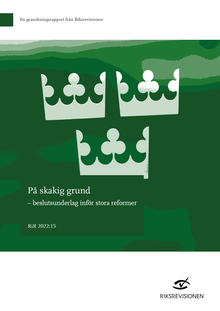 On shaky ground – decision support ahead of major reforms (RiR 2022:15)