The Government decided to introduce temporary border controls in November 2015. Since then border controls have been set up in the South and West police regions. The police implemented them appropriately, given the conditions existing in the acute situation. But both centrally issued instructions and governance were deficient, which means the controls were at risk of incorrect implementation. 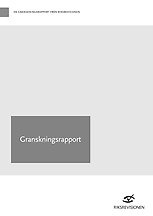